Crypto exchanges in moral dilemma over whether to restrict Russian accounts

Like many, I watched the excellent Michael Jordan documentary, The Last Dance, during one of approximately thirteen lockdowns in my native Ireland in 2020. There’s one episode in particular that I was reminded of this week, following the developments in Russia and the implications on the cryptocurrency market. It is the sixth episode, examining Jordan’s status as a role model.

“If I had a chance to do it all over again, I would never want to be considered a role model. It’s like a game that is stacked against me. There’s no way I can win”, Jordan lamented.

Jordan, of course, was a global superstar in the 90’s. Kids queued around the block to grab his latest pair of sneakers. His poster adorned teenage bedrooms around the globe. Millions young shoulders donned jerseys with the number 23 on the back.

However, Jordan faced criticism for not utilising his platform to do enough; for not embracing his responsibility as a role model. Not that he was a bad role model, by any stretch. Merely that he took the line of “I’m just an athlete, I just put the ball in a hoop”. Certainly, his lack of activism contrasts to several current sports stars, from basketball heir LeBron James to Formula 1 driver Lewis Hamilton.

In many ways, I felt for MJ. But then again, that’s the game he played – like it or loathe it, there are parts of every job that people don’t like.

What caused my mind to wander to Jordan’s gravity-defying skills was the issue of the economic sanctions being levelled against Russia, and how the how the cryptocurrency industry ties in to it. Binance CEO Changpeng Zhao gave an interview on Bloomberg TV which I felt took a leaf out of Michael Jordan’s book.

“It’s not our decision to make to freeze user accounts…I think we should separate the politicians to the normal people”, he said. “We are following the position supported by governments all around the world. Again, we do not make the sanction rules; there are organisations who make those rules – we follow them”.

But does CZ, Binance and cryptocurrency at large not have a responsibility to stand up and join the masses in levelling economic sanctions? Are they providing Russia a means to circumvent financial sanctions? Are Binance thereby indirectly inhibiting what are, at heart, measures designed to prevent a war and the deaths of countless innocent people?

Or is Binance merely an exchange? Is CZ merely a CEO of a finance company? Is Michael Jordan simply a basketball player?

In truth, I’m not sure how I feel about this. To be clear, I love crypto with all my heart. I believe it will change the world for the better. It will disrupt what I believe is an archaic, inefficient and unfair financial system, helping to build a more democratic society and a more transparent, trustworthy and efficient monetary framework.

A lot of those advantages come down to the perks that decentralisation offer. The cutting out of middlemen, the pivoting of trust from institutions – who can be corrupt, stack rules in the elite’s favour, increase inefficiency and fees etc – to math, in the form of a transparent, verifiable ledger which the world has come to know as the blockchain.

But what if that decentralisation facilitates malevolent entities such as Russia to circumvent sanctions, granting them the ability to wage a war on an innocent country?

Poking fun at myself a little here

It’s given me pause and, like I said, I love crypto. I’ve scoffed in the past at what I believe are silly arguments against crypto, such as “it’s for criminals” or “it helps drug dealers”. Sure, but it’s a drop in the ocean – you think the US dollar isn’t used for any crime? (A study from 2009 found that 90% of US dollars contain traces of cocaine).

But the Russian issue has given me pause for thought. Binance, which is centralised, does have the ability to freeze accounts. A KYC-compliant exchange, it has the ability to, say, freeze the account of a Russian oligarch shifting millions of dollars in crypto around. This ability to freeze – because it is centralised – is what crypto purists lament, sniggering at Binance for not being true to the philosophies of crypto.

“Bitcoin is the embodiment of libertarian values, which strongly favour individualism and human rights” Powell contested.

But what if those individuals are Russian billionaires in cahoots with Putin, funding a devastating war? 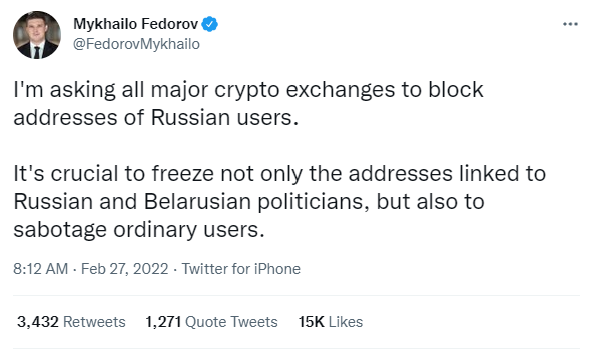 So what is the solution?

It’s really difficult. Indeed, we are seeing similar examples all across Big Tech. Twitter banning Trump was possibly the most prominent case – to paraphrase Powell above, is that not one individual exercising his individualism? Spotify’s messy tussle with Joe Rogan is another moral grey area, while Facebook’s feeble efforts to combat false information. Obviously here, the stakes are bigger with the war in Ukraine, but the themes of liberty, censorship and restrictions are similar.

Like I said, I love crypto, and I truly believe in my heart that it can do so much good for this world that we live in. But should we be gung-ho in advocating for a fully decentralised world when malevolent actions of this scale could benefit from it?

Ultimately, I still think the benefits outweigh the downsides. I think it’s slightly exaggerated right now as to what Russia could actually do with cryptocurrency, as on a sovereign scale it simply is not feasible to transact meaningfully. Their frozen foreign assets of $630 billion (for which they could otherwise fight the economic sanctions and help support the ruble) would comprise over three quarters of the Bitcoin market cap. Not to mention the trackable transparency that blockchain offers. The advantages which crypto can offer worldwide are simply too large.

As for the specific cases of Binance and Kraken, I agree with Zhao and Kraken. Like Michael Jordan was just a basketball player, they just run fintech companies. Since when should they make decisions of this magnitude? That’s for governments to do, and both have indicated that they will obey the law, should the politicians decide to act (as happened with the freezing of assets in Canada of protestors recently).

There’s advantages and disadvantages to everything, especially when on the scale of what crypto is trying to do, i.e. disrupt the entire financial sector. The current financial sector certainly isn’t perfect – let’s not forget that. I’m not claiming crypto is either, but it’s only just beginning and it won’t be going anywhere anytime soon. Look how far it has come already in barely a decade.

So don’t twist it, crypto is still the good guy.

Number of Devs on Ethereum Remains Robust Despite…

Top 3 cryptocurrencies for a high ROI in August 2022

The Number of Cryptocurrency ATMs Installed…

The Poor Will Stay Poor Because Of This