Given the jarring news overnight that Russia have invaded Ukraine, it feels a little trivial writing about finance this afternoon. I really hope the people of Ukraine will be OK and, on a personal level, I just can’t believe in 2022 that we are on the brink of war in Europe. It’s sad.

But in looking at financial markets, volatility has understandably spiked in the last 24 hours. In this piece, I want to focus on something I have found particularly interesting: Bitcoin’s price movement compared to other major asset classes. Because one of the most seductive narratives in crypto is that of the hedge theory:

•    It is digital gold – accordingly, it improves risk-return characteristics of a portfolio containing stocks.

Specifically the latter point is one I want to address, in the context of the last 24 hours.

So, Putin declares war. How did markets react?

•    Gold: The commodity hit a 17 month high, rising circa 1.5% and therefore making good on its hedge promise. Gold bugs rejoice, but nothing too out of the ordinary here either.

•    Bitcoin: The self-proclaimed digital gold has talked itself up as a hedge for a while now. Well, we have our crisis and we have our stock market plunge – so time for Bitcoin to put its money where its mouth is. The result? A 7% nosedive.

In crises, correlations go to 1. There’s a flight to quality; investors de-risk and prefer to hold safe-haven assets, of which cash is the most obvious. Gold, for its part, has long had a reputation as a safer store of value. The events of the last 24 hours have shown us that Bitcoin does not yet qualify as such a safe-haven asset. Volatility and crypto go hand in hand like peanut butter and jam; until that standard deviation comes down, Bitcoin’s aim to establish itself as a store of value won’t be achieved.

So, Bitcoin is still the apprentice to the master that is gold.  With latest 30-day estimates on Bitcoin’s volatility sitting at 3.36%, it’s hardly surprising that investors are shedding exposure in turbulent times. For avoidance of doubt, this is not to say gold is a better investment than Bitcoin (I use the “master” term very loosely above). Personally, I can’t convince myself to hold gold given the return characteristics that it has displayed over the last decade (less than a 5% return since 2011, a time period when every other asset has rocketed upwards). The opportunity cost of holding gold has been catastrophic in recent times. But this piece is about hedging properties, not expected return – and right now Bitcoin hasn’t been able to hold up in times of market downturns. 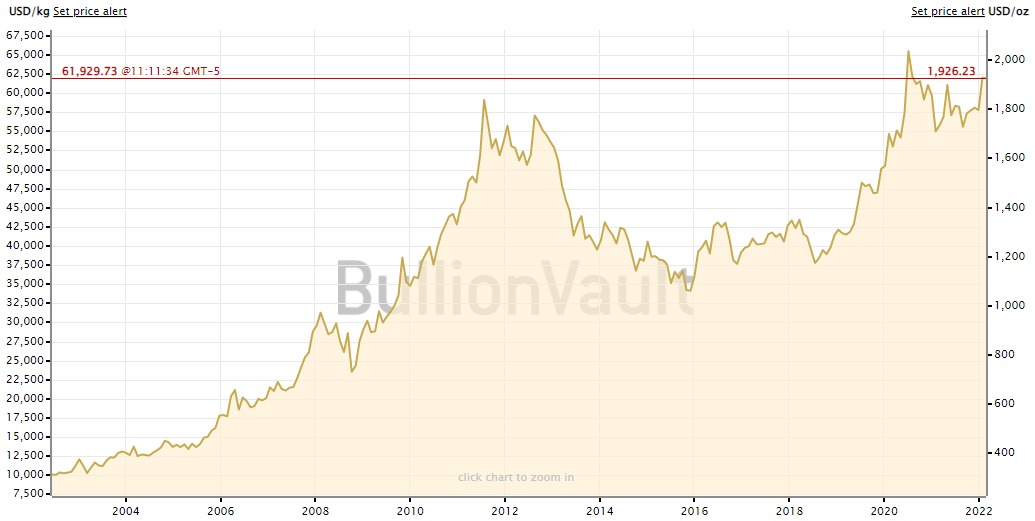 Gold is only just above 2011 highs, via BullionVault.

What we need not overlook here (and I will say it time and time again) is the infancy of Bitcoin. Created only in 2009, its growth into the mainstream has been beyond even the wildest crypto fanatic’s dreams. Still, people are impatient with the volatility – but what do you expect? A reputable store of value, fully established after scarcely a decade? Cultures first discovered the shiny beauty of gold back in 4000 BC – that’s thousands of years for it to work on its store of value properties. Do you think the pharaohs in Egypt in 1200 BC were making jewellery out of Bitcoin? Was Spanish conquistador Hernán Cortes’ eye drawn by the sparkling quality of blockchain technology in the 16th century?

So, while Russia’s march into Ukraine shows us that Bitcoin is not yet a reputable store of value, this should not come as a surprise. Right now, of course you would rather be in cash or gold than crypto when a war is announced. You don’t need to dig into the numbers for that to be obvious.

Let’s rewind the clock to March 2020, when our friendly neighbourhood pandemic first exploded onto the scene, sending seismic waves throughout markets. Granted, it was a bigger shock than Putin’s aggression last night, with S&P 500 having two of its worst six days ever in the space of a week (-12.0% and -9.5%), but it’s the most recent crisis we can point to. Bitcoin, on the other hand, shed half its value in the blink of an eye, plummeting from $7,900 to $4,100. Like my roommate used to say, once you get into crypto, stocks feel…boring. 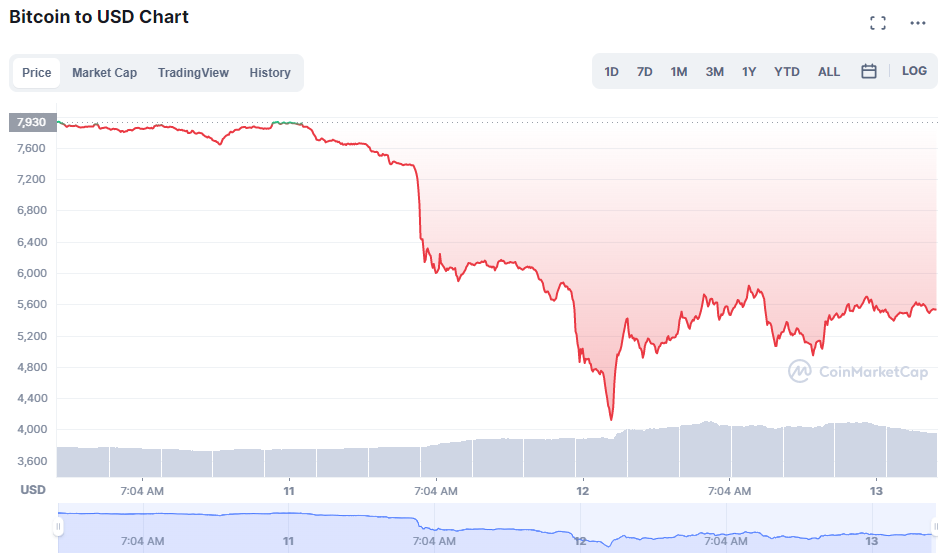 Since March 2020, we have seen Bitcoin added to Tesla’s balance sheet, become legal tender in El Salvador, enter mainstream media coverage and march beyond a $1T market cap (before falling back this year). The vicious dips, however, have still appeared:

So today’s pullback barely even scratches the surface, and that’s with real-world events causing them. The May 2021 crash in particular was seemingly random, with crypto just….being crypto.

Let me be clear: I’m bullish long-term on Bitcoin. I think the progress made on the institutional side, the brilliant minds who have crossed over from trad-fi and the mainstream acceptance are all incredibly positive developments over the last two years. I think there’s a very important role for Bitcoin to play in our society’s future. However, there is no getting around the fact that all this volatility still makes it a nervous short-term hold, and right now it certainly has not achieved store-of-value status. For curiosity, I ran the numbers on the monthly returns of the S&P 500 against Bitcoin going back to 2013, to see how the correlation has moved. You can see that since COVID it has been relatively strong (2020 in particular has a very high correlation, with the Up Only environment caused by Fed printing). Prior to 2019, it’s a bit all over the place, as Bitcoin had yet to find mainstream traction. Not much of a pattern either way. 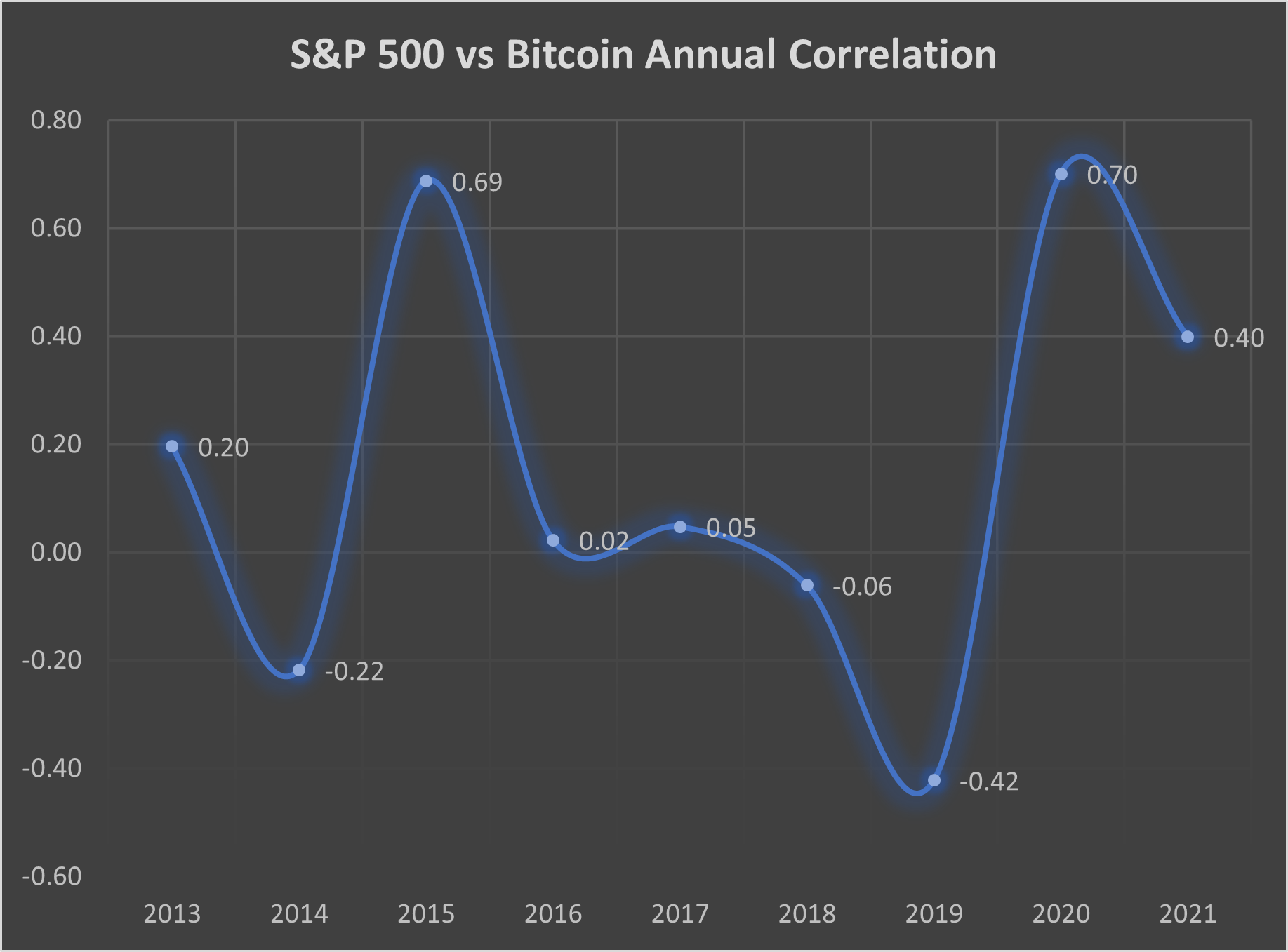 There may be a day when such negative macro events, like the last 24 hours, will cause Bitcoin to tick up 1% or 2%. Bitcoin could be steady, a safe-haven asset and it will be less fun to talk about. I certainly won’t have to be writing articles on a daily basis about it, so perhaps it will even put me out of a job. But that decoupling with other risky assets has not occurred yet, and the last 24 hours are further proof of that. Bitcoin needs to become more…boring.

In signing off, perhaps Plan B (creator of the Bitcoin Stock to Flow model) says it more succintly in a tweet: 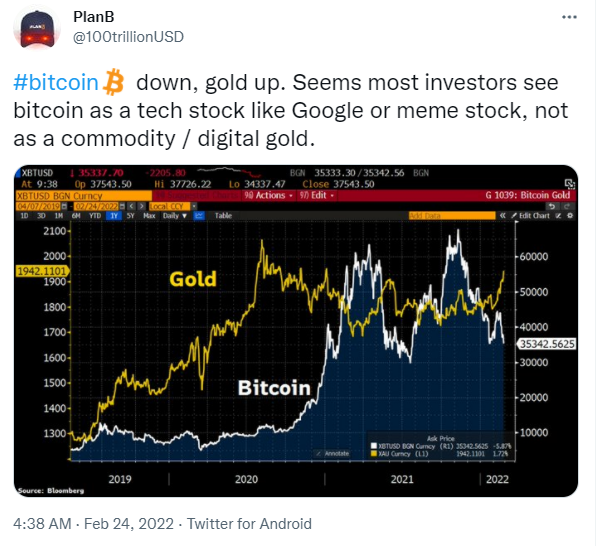 This Legendary BitCoin Trader Says Coin Is At A Pivotal Point

Countries and institutions move into crypto despite…

Rumors of a new native ‘Twitter Coin’ emerge while…

Inside South Korea’s wild plan to dominate the metaverse –…